Improving collaborations between public authorities and social partners in Europe

History of the approach

December 2010 - December 2011. order to improve their ability to cooperate and take more effective action regarding the transnational secondment of workers, the labour departments of Belgium, Spain, France, Luxembourg, Poland and Portugal were involved in a joint programme for training their agents, which was coordinated by the INTEFP and ASTREES from December 2010 to December 2011. 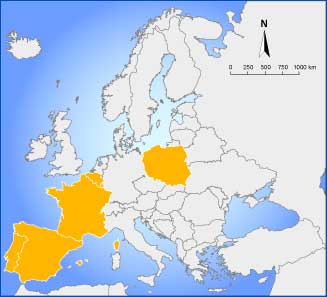 This initiative led to the creation of a European network of 30 factory inspector "representatives", which put together a shared transnational resource centre on the secondment of workers: the EURODETACHEMENT website.

This project highlighted the fact that public authorities are unable to act alone when dealing with the complexity of the situations encountered.
The social partners also play a key role as they are the essential link between the businesses, employees and public authorities.

July 2012 - July 2013. As a result, a new project emerged, which was designed to make use of the momentum created by EURODETACHEMENT in order to develop this by focusing on the following two sectors that are particularly concerned by secondment: agriculture and construction.
The expansion was twofold: on the one hand, the 2012 project expanded the partnerships to include Denmark, Estonia, Finland, Lithuania and Romania and on the other hand, the European worker and employer union federations of the construction and agriculture sectors (FIEC, FETBB, EFFAT, GEOPA COPA) joined this new initiative, along with 19 employers and trade union organisations at the national level.
The final purpose of the project was to identify the complementary expertise and synergies in the roles undertaken by each party in order to consolidate the stakeholder networks and the impact of the initiatives that they lead.
Transnational workshops involving 98 operators within 3 geographical areas, which were identified according to the economic activities and flows of workers, were organised as well as a final seminar in June 2013 (150 people, representing 20 member states). 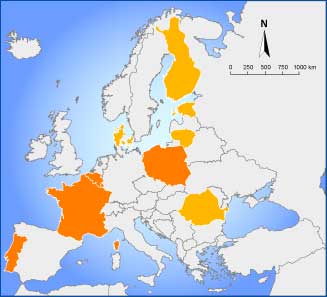 Using the lessons learnt from this initiative, the organisations involved decided to pursue this enterprise at the project summary coordination committee, with the following two work objectives:
-increasing the capacity of the qualified inspection agents and the liaison officers to cooperate transnationally and thereby enhance the impact of initiatives conducted by the public authorities;
-pursue the development of synergies between the public authorities (factory inspections, authorities responsible for social welfare and the tax authorities) and the social partners. 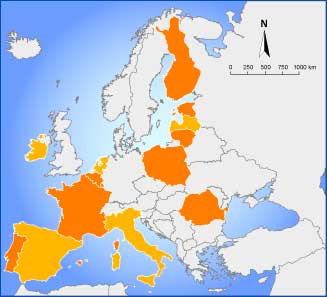 The second stage of the project was then opened in 2015 on the collaborations between the stakeholders, including the social partners.
A two-day seminar on 27 and 28 January 2015 gathering together 167 participants from 25 member states (Austria, Germany, Belgium, Bulgaria, Croatia, Denmark, Spain, Estonia, Finland, France, Greece, Ireland, Italy, Latvia, Lithuania, Luxembourg, Malta, the Netherlands, Poland, Portugal, Czech Republic, United Kingdom, Romania and Sweden) made it possible to share experience on various types of initiative (information and awareness building, inspections and monitoring, prevention and anticipation of potentially problematic situations).

Who participates in these projects ? What does this produce ? 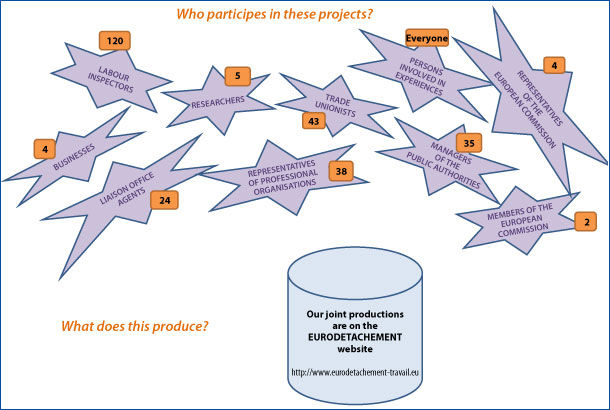 What are our activities and our work methods? 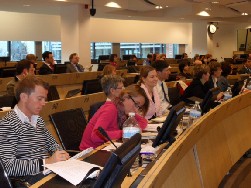 Periods of discussion to find out about the organisations, rationale behind initiatives, methods, legal instruments, practices of the public authorities and social partners of the various countries involved in the project. 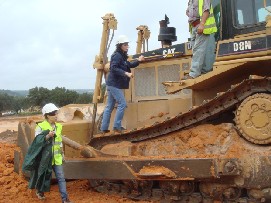 Reports written by the participants in order to identify not only the difficulties encountered, but also the springboards for improving administrative cooperation and the exchange of information between public authorities and the other stakeholders of these operations. 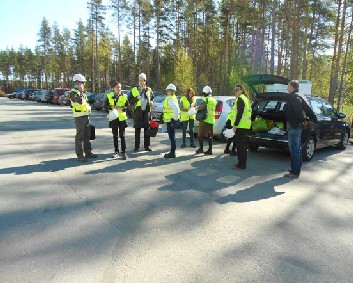 As well as for identifying "best practices" in the three following areas: information and building awareness among the general public, the monitoring and inspection of workplaces and anticipation and prevention initiatives, particularly for major operations or recurring operations.

2- Transnational workshops, seminars for sharing information between the countries, from which the seconded workers originate, and those that welcome them, for these professionals (factory inspectors, liaison office agents) and for other players involved in experiments in the area of worker secondment (trade unionists, business representatives, professional organisations, other public authorities) in order to:
Using identified real situations 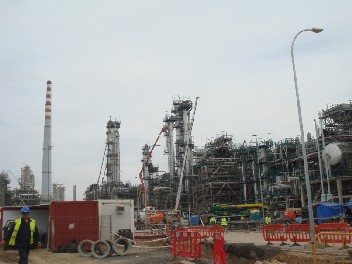 Pool the available knowledge regarding work situations, economic principles in the sectors concerned and the real living and working conditions of the seconded workers.

Sharing analyses regarding the obstacles, sticking points and difficulties encountered. 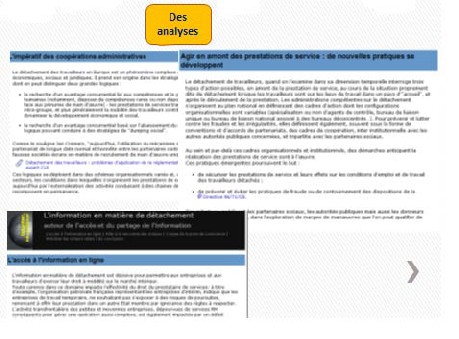 Building and developing drivers and instruments for taking action

Using a so-called 'bottom-up' work method, that is:

The participants list of the cases, propose analyses, report on the problems and successes they have encountered, consider measures to drive change and formulate proposals.

In the coordination committee meetings of the different projects

Using the work done, the managers of the national public authorities and representatives of the European federations discuss the frameworks, resources, methods and tools which support and add structure to the initiatives in the field and the administrative cooperation.